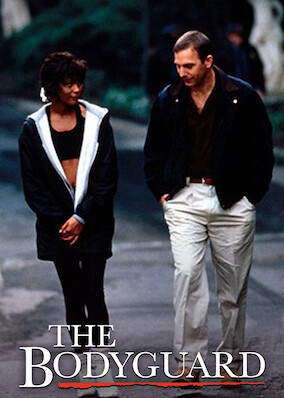 The Bodyguard is a romantic thriller first released in 1992. The movie revolves around Rachel, a successful R&B singer who is being hounded by a dangerous stalker. Rachel, played by Whitney Houston, hires an ex-Secret Service agent working as a bodyguard to protect her from her seedy pursuer. The narrative-driven blockbuster sends Rachel on a romantic whirlwind where she ends up in love with her bodyguard, played by Kevin Costner. Her advances are met with professionalism from the bodyguard, sending her rebounding rashly into harm’s way.

This cult film is a classic due to its incredible soundtrack, which has sold millions of copies worldwide. It is the perfect Sunday afternoon movie for couples looking for that perfect combination of raunchy romance and thrilling action.

Can I stream The Bodyguard on Netflix?

Anybody with a Netflix subscription can stream The Bodyguard because it is currently available on Netflix in a total of 10 countries: Australia, Czech Republic, Hungary, India, Lithuania, Poland, South Africa, South Korea, Sweden, and Switzerland.

Simply choose a recommended VPN from this article, connect to a server in one of the countries mentioned above, and enjoy streaming this classic thriller curled up with a big bowl of popcorn.

How to watch The Bodyguard on Netflix

Streaming content on Netflix that is currently blocked where you live is simple once you get a VPN subscription. Connecting to a VPN server abroad makes it seem like you are actually living there. This instant act of digital globetrotting automatically alters your Netflix catalog; letting you stream any extra content only available in that location.

Follow the steps below to stream The Bodyguard on Netflix from anywhere:

Don't forget to check out what other films and TV shows are now available!

Why You Need a VPN to Watch The Bodyguard

Netflix is bound by the contracts it enters into with content producers and copyright holders. As a result, it can’t show all content all over the world. Netflix US is widely known to have the most comprehensive catalog. However, some countries have exclusive titles not available in the US or elsewhere. As a result, you must spoof your location to a country where The Bodyguard is currently being licensed by Netflix.

With a VPN, you can pretend to be anywhere in the world. As soon as you connect to a VPN server, you appear to live in a different country. As a result, your Netflix catalog will automatically update to show you any extra content available in that region; including The Bodyguard!

ExpressVPN is a VPN service based in the British Virgin Islands that is extremely easy to recommend. It is a reliable service with apps for all platforms, which means you can use it for streaming Netflix on all of your devices. It even lets you install it on up to 5 devices at the same time! As a result, you can easily pretend to be in Australia to stream The Bodyguard. This VPN is easy to use, and it has servers in 94 countries – to let you unblock plenty of Netflix catalogs and any other geo-restricted content from around the world. This VPN has 24/7 live chat support to help you when you need it. Best of all? ExpresVPN has some of the fastest Tier-1 servers available on the market, which will let you stream The Bodyguard on Netflix without any buffering. An outstanding VPN, that you can try risk-free thanks to its 30-day money-back guarantee.

NordVPN is another market-leading VPN service that is ideal for unblocking regional content on Netflix. This VPN is notable for unblocking a massive list of international Netflix catalogs. As a result of this, you will be able to connect to a choice of servers in order to enjoy streaming The Bodyguard. NordVPN has apps for all platforms that are easy to use and fully featured. And, it has servers in a total of 59 countries. This makes it great for unblocking Netflix content – or anything else that takes your fancy. Admittedly, NordVPN isn’t as fast as ExpressVPN. However, it never has any trouble streaming HD content on Netflix, which makes it a superb option for unblocking The Bodyguard. You can compare it to our other recommendations thanks to its 30-day money-back guarantee.

PrivateVPN is a reliable and secure provider based in Sweden. It is a no-logs VPN with apps for all popular platforms, and It is one of the few VPN providers that can provide access to a wide selection of international Netflix catalogs. This makes it perfect for streaming The Bodyguard. PrivateVPN has servers in over 50 countries, ideal for accessing all kinds of geo-restricted content. It also lets subscribers use the VPN on up to 6 devices, meaning that you can unblock more Netflix titles both at home and when on public WiFi using a mobile device. We consider this excellent VPN a budget option. However, it provides everything you need, including fast speeds for HD streaming. You can test it yourself using its 30-day money-back guarantee

The Bodyguard is a cult thriller directed at a time in history when the thriller genre was at its best. The movie has been described not as a love story, but rather a film about social status and the wide divergence between the lives of the rich and famous – and more ordinary members of society. The movie is a story of a love affair that flourishes between two people who are forced to spend time together. The romance drives the narrative forward in the tense and edgy manner that is characteristic in this kind of romantic thriller; creating the perfect environment for the protagonist to be driven into the arms of the one man she must be protected from. Whitney Houston, who makes her screen debut, plays the character masterfully with the perfect melange of sweetness and egotistical selfishness. As is a convention of the genre, the high paced film has an overtly steamy aura, epitomized in the scene with the samurai sword and the scarf, we’ll say no more. Well worth a watch.

No. Netflix values you as a paying customer, As a result, it does not engage in banning users who unblock content with a VPN. Instead, it focuses on blocking known VPN servers. This is why you must subscribe to a VPN service that is known to work with Netflix without issues.

"accordion" question="What if the VPN doesn't work?" answer="All of the VPNs recommended in this article have been carefully selected because they are known to work with Netflix. Some VPN providers only provide access to the US Netflix catalog, which limits the amount of content you can unblock. Our recommendations have a wide range of servers that are known to unblock many international Netflix catalogs. As a result, you can access more unusual Netflix titles from around the world. If your VPN isn’t working to unblock a specific title for some reason, simply contact your VPN’s support team to find out which server you should use or check out our Netflix VPN troubleshooting guide. There is a chance that your VPN will not unblock a certain Netflix catalog. Thus if a show is available in more than one country (as is the case with The Bodyguard) check to see which of the available countries is a better option."