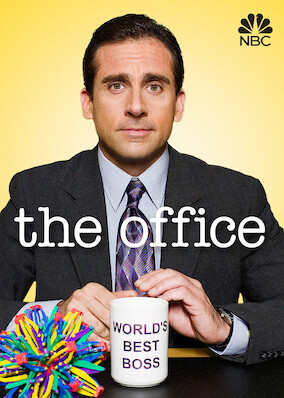 The Office (US) is a mockumentary sitcom starring Steve Carell as Michael Scott – the nutty and deluded manager of a Pennsylvania paper company branch. The massively popular show is the American remake of a British sitcom by the same name – originally written by and starring Ricky Gervais. While the British version of The Office is highly dry and sarcastic, the US version is often slapstick and much more direct in its comedic style. Carrell’s performance is hilarious, and the entire cast is pure gold. The Office (US) is perfect viewing for any occasion when you just need a good laugh!

Is The Office on Netflix?

Yes, The US Office is on Netflix! However, it is only available in specific countries Netflix catalogs, these are listed above. If you aren't in any of the locations listed above, you can still access the show by using a VPN service to spoof your location. All you have to do is sign up to a VPN service with servers in the locations above, we've recommended some below, connect to it and stream Netflix as if you were elsewhere.

However, please beware that The Office (US) is due to end its run on Netflix in 2021. That means that you will need to stream the entire show before next year if you do want to see all of it! To do so, simply pick one of the VPNs recommended in this article and connect to a server in the US. As soon as the VPN connection is established, your Netflix library will automatically update and you can stream The Office.

How to watch The Office (US) on Netflix

Streaming content that is only available on Netflix US (like The Office) is easy as long as you subscribe to one of our recommended VPNs. Our expertly chosen VPN recommendations have custom apps for all platforms, which means you can stream The Office on any device.

Follow the steps below to set up your VPN and unblock The Office:

Why You Need a VPN to Watch The Office (US)

Contracts and licensing agreements between Netflix and the producers of The Office mean that Netflix can only broadcast the show in America. This means that people paying for a Netflix subscription elsewhere in the world can’t watch it – unless they get a VPN subscription.

By connecting to a VPN server in the US, your IP address appears to actually be in America. As a result, your Netflix catalog automatically updates to include US-exclusive content such as The Office.

ExpressVPN is a provider that is often considered the best VPN in the world. It is a zero-logs provider based in the British Virgin Islands that can provide instant access to a whopping 24 different Netflix catalogs – including the USA for streaming The Office (US). ExpressVPN has apps for all platforms that are easy to use. This makes it perfect for streaming exclusive Netflix content from around the globe on any device. In addition, ExpressVPN allows its subscribers to use the VPN on up to 5 devices at the same time. That means you can stream The Officeboth while at home or on vacation (on public WiFi). Plus, this VPN has live chat support to give you help if you need it! You can try the service risk-free, by making the most of its 30-day money-back guarantee.

NordVPN is another superb, reliable VPN provider based in Panama. It is ideal for unblocking Netflix content from all over the world because it provides access to 14 different Netflix catalogs – including the USA for streaming The Office (US). NordVPN is not expensive, it has a lot of advanced features, and it is massively versatile. It also provides the necessary speeds for streaming in HD without buffering. We love this service because it can unblock not just Netflix but a large choice of international streaming services. An excellent all-rounder that you can compare to our other recommendations thanks to its 30-day money-back guarantee.

PrivateVPN is a provider from Sweden that comes highly recommended by subscribers. It is a low-cost service that has proven to be popular due to its large feature set. It is a no-log VPN with apps for all platforms, and it is one of the few VPNs that can unblock a wide selection of international Netflix catalogs. This makes it perfect for streaming The Office (US)– or any other exclusive content showing on Netflix catalogs around the world. Considering the low cost, this VPN provides fantastic speeds for streaming in HD. It also lets subscribers use its apps on upto 6 devices simultaneously. A superb VPN that is well worth taking for a test run using its 30-day money back guarantee.

About The Office (US)

The Office is a mockumentary-style sitcom, filmed in such a way that it seems as if the characters are being followed around by a film crew at all times. The plot centers around the employees of a paper company, specifically those workers at a branch in Scranton, Pennsylvania. In total there are nine seasons to stream, and the whole thing is a gut-wrenching furor of laughs.

The deluded manager, played by Steve Carrell, believes he is the greatest manager of all time – using some of the most unorthodox and hilarious methods ever devised to keep his crew under control.

The show has it all, from Dwight Schrute the overbearing suckup who hilariously commands the fake position of assistant manager, to the romantic triangle created by the receptionist, her best friend in the desk opposite, and her boyfriend in the delivery department downstairs.

Office romances ensue in the most unlikely of places, paper sale targets are met and failed, and Michael Scott calls more staff meetings than you can shake a stick at – all the while accompanied by the kinds of insane escapades that will provide a laugh a second. "Parkour!"

No. Netflix understands that you are a paying customer, and it doesn’t want to lose your subscription fee each month. For this reason, it never bans users for unblocking more content using a VPN. Instead, it focuses on blocking known VPN IP addresses. This is why you must subscribe to a VPN service that is known to work with Netflix, or else you will end up disappointed. Stick to the VPN services in this guide and you can stream The Office (US) without any problems.

The VPN recommendations in this article were selected because they all work to unblock Netflix. Some VPN providers only provide access to the US Netflix catalog, which limits the amount of content you can stream. Our recommendations have a wide range of servers that are known to unblock many international Netflix catalogs. As a result, you can access exclusive Netflix titles from all around the globe. If your VPN isn’t working to unblock a specific title, check out our Netflix troubleshooting guide or contact your VPN’s support team to find out which server you should use. There is a chance that your VPN will not unblock a certain Netflix location. However, all our recommendations work with Netflix USA – so you will be able to stream The Office US for certain.