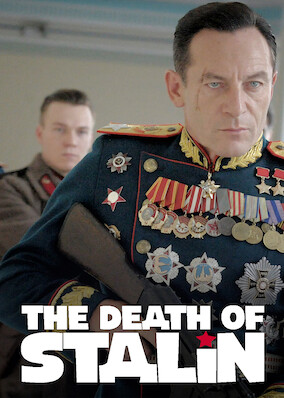 The Death of Stalin is a 2017 satirical dark comedy. The film is set in Moscow during 1953, when the Soviet dictator Joseph Stalin becomes ill and quickly dies – leaving a power vacuum in his wake. A fight for leadership ensues, with members of the Council of Ministers scrambling to gain control.

The film is perfect for anybody interested in seeing a funny movie that is loosely based on historical events, and which deals with the contentious subject matters of death and totalitarianism. The critically acclaimed film is invigorated by a superb cast, including an outstanding performance from Steve Buscemi as Khrushchev.

However, it is worth mentioning that the film was banned in Russia for allegedly mocking its past and its leaders. Thus you will need a VPN to watch anywhere in Russia, as well as in other countries where it is not currently showing.

Can I stream The Death of Stalin on Netflix?

Yes. The Death of Stalin is currently available on Netflix in just three countries: Canada, the USA, and Sweden. Thus, if you live in Russia, Ukraine, Poland, Australia, the UK, or anywhere else where the movie is banned – or currently unavailable on Netflix – you will need to connect to a VPN server. We think the movie is funny, which definitely makes it worth unblocking on your Netflix account, no matter where you happen to live.

To unblock the film, simply pick one of the VPNs recommended in this article and connect to a server in one of the three countries where it is available on Netflix. As soon as the VPN connection is established, your Netflix library will automatically update allowing you to stream The Death of Stalin.

How to watch The Death of Stalin on Netflix

Streaming content that is exclusively available on a foreign Netflix catalog is not difficult, as long as you stick to one of the VPNs in this article. Our expertly chosen VPN recommendations have custom apps for all platforms. These apps will easily let you spoof your location abroad to access additional Netflix content.

By connecting to a VPN server in either the US, Canada, or Sweden, you can easily stream The Death of Stalin. Just follow the steps below to set up your VPN and unblock the movie:

STREAM THE DEATH OF STALIN NOW

Why You Need a VPN to Watch The Death of Stalin

Netflix shows varying content in different countries due to the licensing agreements it has with copyright holders. This causes the Netflix catalog to differ depending on where you live.

The Death of Stalin is currently only available exclusively in the USA, Canada, and Sweden. As a result, you will need to connect to a VPN server in one of those locations to unblock the movie in your Netflix catalog.

It is worth noting that the VPNs we have recommended in this guide provide watertight online privacy, using encryption. This will prevent your ISP and the government from tracking what you do online. As a result, you can watch this film in Russia (where it is banned) if you want to – because nobody will know that you streamed it.

ExpressVPN is an outstanding VPN provider based in the British Virgin Islands. It is a reliable and fast VPN that is ideal for streaming more content on Netflix. The service can provide access to a whopping 24 different Netflix catalogs, including the USA and Canada for streaming The Death of Stalin. ExpressVPN has apps for all platforms that are easy to use. This makes it simple for anybody to stream exclusive Netflix titles on their devices. And, ExpressVPN allows its subscribers to use its VPN apps on up to 5 devices at the same time. That means you can stream The Death of Stalineither at home or on public WiFi. Plus this VPN has strong encryption to ensure nobody knows you watched the movie (ideal if you do want to unblock it in Russia where it is banned). You can try the service yourself, thanks to its 30-day money-back guarantee.

NordVPN is another trusted and reliable VPN provider that is perfect for unblocking Netflix content. It provides access to a total of 14 different Netflix catalogs; including all the most important ones for streaming The Death of Stalin. This VPN is easy to use and versatile. It has strong privacy features to let you watch the Death of Stalin in Russia if you want to (without your ISP or the government finding out). And, it is easily capable of unblocking not just Netflix but a large choice of international streaming services. A superb all-rounder that comes at a great price. You can compare to our other recommendations thanks to its 30-day money-back guarantee.

PrivateVPN is an excellent, no-logs VPN provider based in Sweden. It is a service with apps for all platforms, and it is one of the few VPN providers that can provide access to a wide selection of international Netflix catalogs. This makes it perfect for streaming The Death of Stalin – or any exclusive TV shows and movies showing on Netflix around the world. Although this VPN is cheap, it provides excellent speeds for streaming in HD. It also lets subscribers use its apps on up to 6 platforms at once, meaning that you can easily watch more Netflix on any of your devices. A great option that comes highly recommended by consumers! Well worth considering if you need a cheaper option that is both reliable and private. Test it yourself thanks to its 30-day money-back guarantee.

About The Death of Stalin

The Death of Stalin is a satirical comedy that deals with pretty serious subject matters in a darkly comedic way. The film, which was directed by Armando Iannucci, centers around the struggle for power following Stalin’s 30-year dictatorship. The movie starts with a famous pianist hiding a note in a record bound for Stalin, in which she tells him he has ruined the country. Following Stalin’s sudden death, NKVD leader Lavrentiy Beria locks down Moscow and takes over security duties. Internal rivalries escalate between Beria and members of the Council of Ministers. Eventually, Deputy Chairman of the Council of Ministers Georgy Malenkov is named premier under Beria’s control. The head of the Moscow party, played by Steve Buschemi, is sidelined by Beria who promises many of the reforms wanted by Khrushchev and the council. Later, Beria finds that Khrushchev is friends with the Pianist who left Stalin the note, and he threatens to reveal them both as traitors. However, Khrushchev gains the support of the army and successfully manages to start a coup - opening Moscow’s borders so that trains can resume. Following the successful coup, Beris is found guilty of treason and is executed giving Khrushchev control.

No. Netflix understands better than anyone that you are a paying customer, and it doesn’t want to lose your subscription fee. With this in mind, it never bans users for unblocking more content with a VPN. Instead, it focuses on restricting known VPN IP addresses. This is why you must subscribe to a VPN service that is known to work with Netflix, or else you could end up with a VPN that doesn’t actually work. Stick to the services in this guide and you can stream The Death of Stalin without any issues whatsoever.

The VPN recommendations in this article were carefully chosen because they work to unblock Netflix. Some VPN providers only provide access to the US Netflix catalog, which limits the amount of content you can stream. Our recommendations have a wide range of servers that are known to unblock many international Netflix catalogs. As a result, you can access exclusive Netflix titles from around the globe. If your VPN isn’t working to unblock a specific title, contact your VPN’s support team to find out which server you should use. There is a chance that your VPN will not unblock a certain Netflix location. Thus, if a show is available in more than one country (as is the case with The Death of Stalin) you should check to see which of those countries is a better option.

In Russia, the movie is banned. This means that it is important to ensure you use a secure VPN with strong encryption. Our recommendations all provide OpenVPN encryption, DNS leak protection, and a kill-switch. This ensures that you can unblock The Death of Stalin without your ISP or the Kremlin finding out.